Back in Seoul we visited the National Gugak Center (formerly ‘The National Center for Korean Traditional Performing Arts’)- the primary institution for learning Korean traditional music. We took janggu class! It felt really good to be back playing 장구 ^.^ 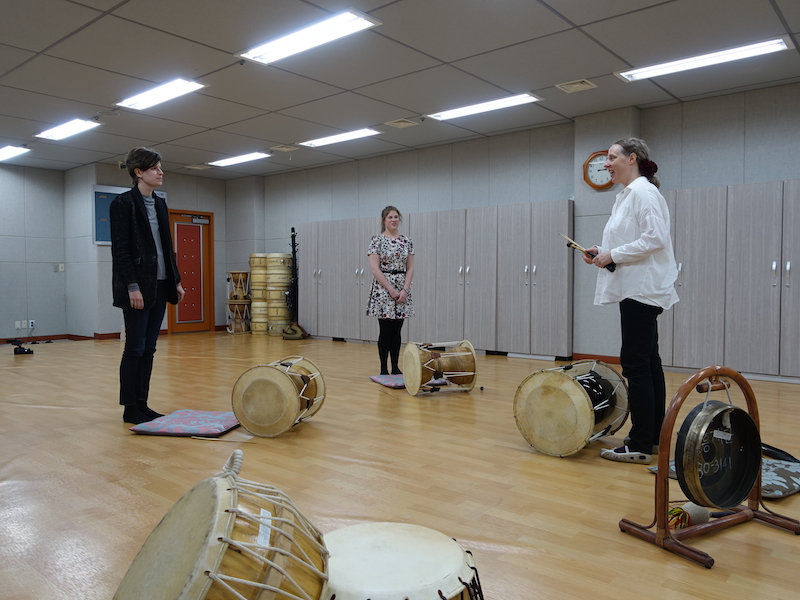 I had actually taken a 16-week Janggu course offered by the Korean Cultural Office in Sydney this year. The traditional drum is really fun to play, but it certainly does take some skill! It took me a little while to adjust back into creating the right sound. We started learning the same piece that I had learnt in Sydney- HwiMoRi (휘모리).

There are three main sounds for janggu- hitting the left is gung (궁), the right is dak (닥) and together is deong (덩). The teacher for our private class is actually from Switzerland! She teaches Janggu regularly at the Center, which has weekly classes. Some are especially for foreigners too! The music classrooms are very nice and obviously built to achieve the best acoustics possible.

Teacher and I were able to play 인사굿 together, and I was happy that my body remembered the feeling of playing!

The class finished, and after stretching our knees and examining our fingers for the “Blisters of Dedication”, we headed outside.

*sounds of dread* It was raining!

Normally this wouldn’t be such a drama, but I had painstakingly straightened my hair for the day !___! My very wild hair, that tends to turn into a curly craziness at even the hint of water *building sounds of dread*

But my distress must have been evident- silently one of the film crew moved to my side and held his umbrella over me *sparkle eyes*  My Umbrella Hero! 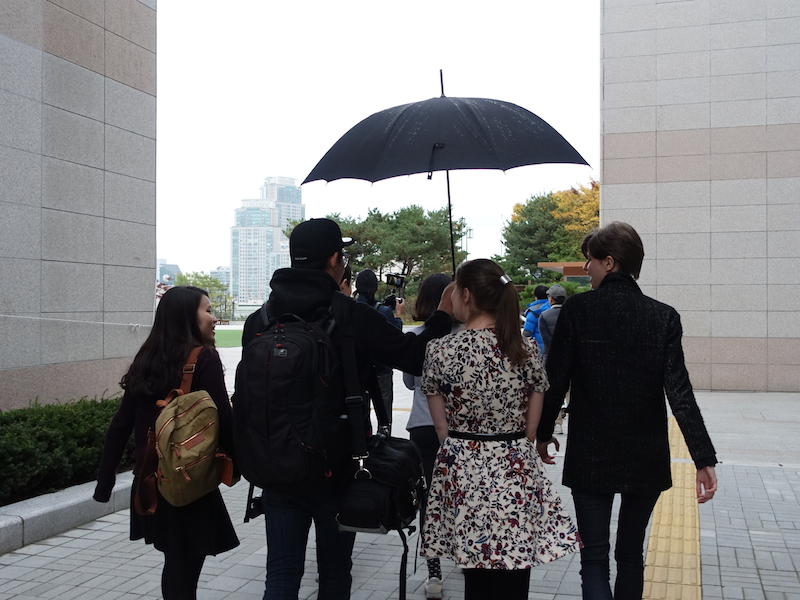 The rain soon stopped though, so I happily danced a little jig. Given our location, I felt it right that the jig be in the style of the traditional dancing arts, and preceded to amuse everyone in the vicinity with a no doubt immensely ridiculous fusion dance of both male and female traditional Korean dance… and Yum Yum Yum by Lipservice. In front of The National Center for Korean Traditional Performing Arts. I’m sorry, I will work harder Dance Gods *bows*

The Center is actually located right next to the Seoul Arts Center, the location I frequented earlier in the year for Dracula. Oh Dracula… how I would embrace you once more! *reaches hands out to Seoul Arts Center, gets dragged away by Holly*

We were then once more on our way, and this time… to DINNER!

***BONUS!! You can read my interview with my Janggu teacher here. Aiden studied at the Korea National University of Arts (which is attached to the Gugak Center) and visited Sydney for a few months this year to teach the traditional arts.