Another fantastically located hotel- right across the road to JR Nikko Station! Although that did make it further away from all the “sites” of Nikko, I think it’s always preferable to be staying closer to the “base of operations”. That way you can get everywhere from where you are, and you don’t have to factor in all the extra travel time when you’re arriving or departing. The rooms were basic but nice, and a good deal bigger than those in our Tokyo stay. Our little window had a view towards the mountains, and as it was rainy and misty for most of our stay in Nikko it made for a wonderfully eerie site! Their buffet breakfast was also incredibly delicious! Especially their homemade jams… drools 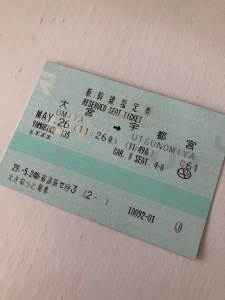 This was our travel day from Tokyo to Nikko- and it is a bit of a trek! In order to take the most advantage of our JR Pass we opted for the route that took us from Shinjuku to Omiya Station, onto the Shinkansen to Utsunomiya Station, and then a final transfer onto the JR Nikko Line! We stopped at Utsunomiya Station and went out for some Gyoza which I spotted from the train as we rolled in. I am always on the lookout for tasty food! Apparently Utsunomiya is known for gyoza, so it was a good pick. 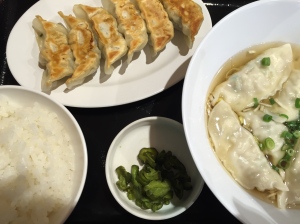 The Tobu Railway Nikko Line was a much smaller (cuter) train, and it was actually really interesting watching the countryside along the way. So many rice paddies- and so different to Australia where everything is basically grazing for cattle! We didn’t see any herd animals at all.

After arriving at Nikko we headed straight across the road to our hotel to check in, and then it was straight back out for adventures! Nikko operates a bus service through most of the sites, so we went back to the station to purchase a ticket. The bus timetable is quite frequent and there was an easy bus stop just next to the station. The bus also helpfully announces (in Japanese, English, Chinese) the stops and sites as it goes along, so you know where you are and when you need to get off.

We also purchased this map, which was quite useful to have as a quick reference (as there is a lot going on in the Nikko area!) 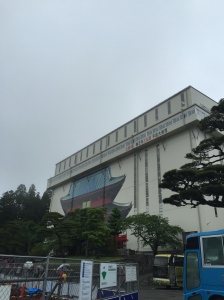 Our first stop was Rinnoji Temple, but as it is under construction it didn’t really feel as though it had that “wow” factor. We ended up walking through it pretty quickly. Having been put off a little by the price for the (not-so-great) experience, we then decided to just walk around the area. The rain made everything so tranquil- the greenery was so vibrant and there weren’t a lot of people around so it was just really nice to wander down paths and up stairs and not much care about where we were headed. A very different atmosphere from busy Tokyo. We did eventually make it to Shinkyo Bridge and that definitely had the wow factor. Again I praise the weather, but it really felt like we had a chance to appreciate the awe-inspiring bridge by ourselves without flocks of tourists around. 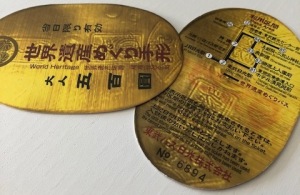 After this we decided to go further up to the location labeled The World Heritage Shrines and Temples of Nikko, and here we visited Toshogu Shrine. This experience had a far greater impact than we experienced at Rinnoji Temple. In particular, if you take stairs to the right- the Sakashitamon Gate marks the start of a 5min ascent (a bit of work up some steepish steps, but manageable) through the woods to Tokugawa Ieyasu’s mausoleum which is described perfectly as “subtle and austere, yet dignified”. And through the shrouded mist and light rain it really felt like it had incredible presence. It was definitely one of my favourite moments/experiences of the trip. 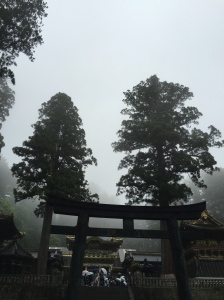 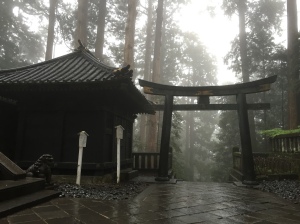 It was starting to get a bit late now, so we headed back in to town and wandered around on the streets for quite a while trying to find somewhere to eat. A bit of a difference to Tokyo! Eventually we found a place, and although it was more aimed at drinking + snacks we put together a good meal with items like chicken skewers, miso beef and butter corn!

Although the rain was still falling we got up early and took the long (but picturesque) bus ride all the way up the mountains to Lake Chuzenji- hoping to see some spectacular views of the Kegon Waterfall. Alas! The beautiful mist which was creating such a spectacular atmosphere for our Nikko visit also meant that both the lake and waterfall were completely hidden from view! 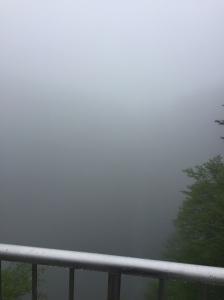 Hoping the mist would clear if we gave it some time we decided to wander around the town and down along the lake, and grabbed some dango to eat along the way. Although obscured the lake still made for a pretty remarkable sight.

The mist still hadn’t cleared closer to lunch, so we decided to have some food and then make a decision. We had delicious udon and tempura mess, with soy-milk skin! It was a nice hot meal and seemed like an appropriate dish for the damp weather. After returning outside there was still no shift so we did a final wander around town before heading back to the bus to go back down the mountain. Fun story! The toilets at the bus terminal had no toilet paper, you had to buy some nearby. I made sure to buy two packs just in case so I ended up with a lot of toilet paper!

It was such a shame we didn’t get to see the lake and waterfall in all their glory, but I’m still glad we did the trip up the mountain. Yet again the experience was so surreal amongst the weather, and the absence of more tourists gave it more weight.

On the way back we decided to get off in the main town area (instead of back to the station and our hotel) so that we could see a bit more of Nikko and we walked back from there. We also stopped for delicious soft serve icecream that was served with honey (yummm) and bought some delicious strawberries!

That night, not really feeling like trying to find another place to eat dinner, I located a supermarket on Maps and we decided to give that a go. What fun!! I actually really like grocery shopping, especially when it’s a unique experience being in another country, and it was really enjoyable walking along the aisles and finding bits and pieces to try. We ended up with a bit of a feast!

Next stop- sunshine in Hakone!